Calvinism is a bad word in today’s world, even in some Christian circles.  John Calvin is reduced in the minds of most to a man who espoused the difficult doctrine of election, leading  to a sort of hopelessness and anti-evangelistic energy towards those who are lost.  He is seen as a stuffy theologian, more concerned with the minutiae of doctrine than the “real world.”  This should not be so. 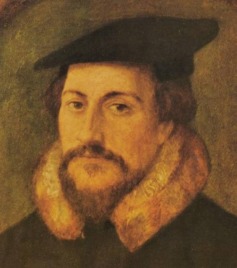 He was one of a handful of men (Luther, Zwingli, etc.) who had an overpowering influence over the course of the church during the Reformation period of the church, the effects of which remain with us.  His theology is not the subject here, nor his conversion, but his abrupt change of course brought about by an over-eager servant of Christ.

John Calvin (1509-1564) lived his early life in France during the tumultuous years of the Reformation.  He was only 8 years old when Martin Luther nailed his 95 Theses to the door.  Calvin barely noticed, and wouldn’t for some time.  He had a powerful mind and intended to spend his days contributing to the new humanism sweeping Europe as an academic, lawyer, or scholar. At some point in 1529-1530, the Lord awakened him and Calvin was set on fire with a desire to increase his knowledge and love for God.  “The reverential love of God to which we are drawn by a knowledge of His blessings” was how God redirected Calvin from humanism to the Cross.

It only took a few years for John Calvin to make an impact.  His rigorous academic training did not go to waste.  He published his first edition of the Institutes of the Christian Religion in 1536, which was a clear and comprehensive description of Protestant theology.  The book remains a standard to this day, and catapulted him to fame immediately in his day.  The Institutes, along with Calvin’s public teachings, would make him an outlaw in France, forcing him to seek refuge in Strasbourg, Switzerland.  Fortunately for the world, and for John Calvin, a detour forced him to stay the night in Geneva instead.  His intention was to stay just one night, but God had orchestrated a “chance” meeting that made his stay much longer.

In Geneva, Calvin was confronted by his extreme opposite in terms of personality: William Farel, who was an outspoken, bold and overpowering evangelist.

In Calvin’s words, he was a man “who burned with an extraordinary zeal to advance the gospel.”  He wanted Calvin to help him reform the church in Geneva.  Calvin initially refused, and Farel proceeded to call down judgment from God upon him: “You are following only your own wishes, and I tell you, in the Name of God Almighty, that if you do not help us in this work of the Lord, the Lord will punish you for seeking your own interests rather than His.”   He was moved by Farel’s persuasiveness and earnestness (and possibly a little fearful).  God used Farel to jolt him from his intended path, and Calvin agreed to stay in Geneva.

For the rest of John Calvin’s life, he would serve the church in Geneva, with the exception of three years of banishment (his reforms were sometimes a little too fast and a little too far for his people).  He would apply his mind as a scholar to the interpretation and teaching of Scripture to a continent of people who desperately needed it.  Calvin struggled with his call to be a teacher and a pastor, which he believed was a struggle with his sinful flesh.  His sense of duty to serve the Lord was placed above his fleshly desire “to study in privacy in some obscure place” as he put it.

We must be mindful that our feelings should not determine our path.  Sometimes the Lord calls us to acts of service that are not in line with our personality.  With Calvin, it took a wild-eyed evangelist rebuking and cursing his selfish propensities to get his attention.  He was shy and timid by nature, but Farel knew God could use him mightily.  John Calvin let go of his personal aspirations and surrendered his life to the service of Christ in a way he never expected or desired.  We should be ready to do the same.